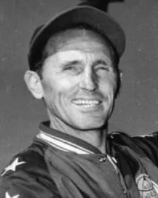 One of the outstanding managers in men’s fast pitch who led the famed Clearwater, FL Bombers to four national titles and four runner-ups between 1946-1957. Also former Florida ASA commissioner. Served as president of the ASA from 1972-1973. In 1939, he was appointed Clearwater recreation superintendent and was named parks and recreation director in 1956. He retired in 1978. Complex in Clearwater is named after him and was dedicated September 22, 1982. Was a member of the National Softball Hall of Fame Committee until his passing in 1998. His son, Tommy, also a former Clearwater, FL Bomber, is a member of the Hall of Fame and is a former seven-time All-America. Only father-son combination in the ASA National Softball Hall of Fame. Passed away May 28, 1998 at age 86 at Tallahassee, FL Community Hospital. Was a native of Slidell, LA. Played professional baseball in Birmingham, AL, Savannah, GA and Macon, GA from 1935-1938 after graduating from the University of Florida in 1934.