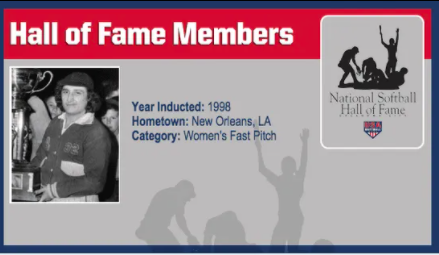 Freda Savona was considered one of the best—if not the best—player in women’s major fast pitch history. Kay Rich, who played for the Fresno Rockets and is a member of the ASA National Softball Hall of Fame, said, “ I believe Freda Savona was the absolute best woman player in the history of the game and probably the premier woman athlete of her time. She had all the skills--unusual speed, great arm, devastating bat power for average and distance, tremendous fielding range and agility. She was aggressive, daring, highly competitive and the complete player.” Savona batted consistently around .400 for the New Orleans Jax Brewers of New Orleans, LA who were formed in 1939 by Manager Heard Ragas. Between 1942-1947, Savona led the Jax to five ASA national titles and numerous victories against the best women’s teams of that era. The Jax rarely lost and at one time won 89 of 90 games in a row. One of their few losses came in 1944 when they lost twice to the Phoenix Ramblers by 1-0 scores. Freda played shortstop and her sister, Olympia, could play just about any position on the field.