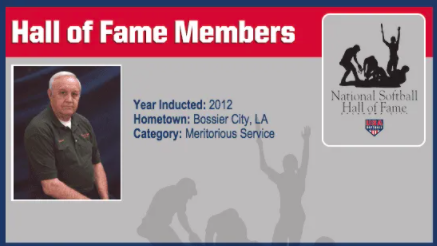 Ivan “Ike” Wheeler’s commitment and love for the game of softball is evident throughout his 59 years of involvement with ASA. While serving in the Air Force from 1954-1974, Ike was a member of the Strategic Air Command team, which won eight Air Force World Wide tournaments, and was selected to the All Air Force team twice. After retiring, he joined the Shreveport Parks & Recreation Department and continued his work on promoting ASA and softball. Ike has been a registered ASA umpire for over 56 years and has served as District Commissioner in the Shreveport area, ASA Player Representative, and Louisiana Umpire-in-Chief. In addition to these positions, Wheeler has been a member of the ASA National Indicator Fraternity since 1988 and a member of Louisiana ASA Hall of Fame since 2010. Some of his accomplishments he has achieved since joining ASA are: recipient of the Region 6 Award of Excellence (2009) and umpired four National Championships (1982, 1987, 1988, 1997) in addition to serving as either Tournament Director, Umpire Coordinator, or Housing Authority for 17 National Tournaments. Since 1978, Wheeler has successfully registered every team in the Shreveport Parks and Recreations Department for ASA, and has attended every Umpire-in-Chief clinic and ASA National Convention since 1982.